Would you have survived this X Factor feedback from judge Natalia Kills? 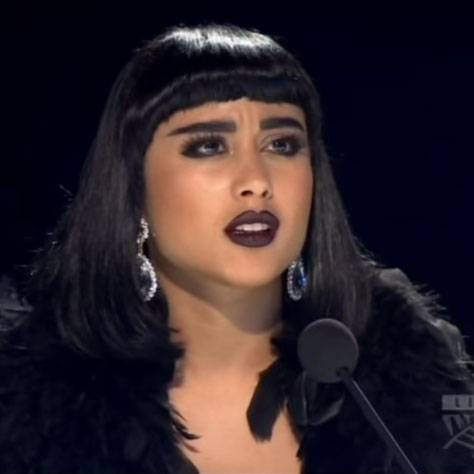 In just a few minutes, another individual’s dream is crushed……

Over the last few years as reality TV shows featuring aspiring young artistic talent have taken hold, we have watched with bated breath as the judgments have been laid down, sometimes shocked by the bluntness of the feedback of the judges and observed the debate on social media as to what is reasonable and what goes too far.

Comments like “Stick to your day job darling!”  from Natalie Bassingthwaighte  or “I enjoyed the dancing, but you can’t sing” from Mel B have become commonplace.  Despite boos from the crowd to her bluntness, judges like Mel B have stuck to their guns and often end their feedback with something like  “It is an absolute NO”.

Does this sound familiar? The thing about reality TV shows is they have a habit of bringing people back to reality as quickly as they can change someone’s reality.

A public outcry regarding criticism that turned to bullying….

But last night I read a post on social media about the most disturbing example of that very situation, an example that in my mind was a clear example of what it means to go too far; an illustration of the abuse of a position of power and the willingness to humiliate and to tear someone’s confidence apart through bullying.

This footage features the recent treatment of a contestant by the judges Natalia Kills and Willy Moon on X Factor New Zealand, footage that has outraged people across the globe. Due to the network’s judgement of this behaviour as bullying and the pressure of the commentary from fans,  there has been an almost instant dismissal of the husband and wife team who have apparently showed no remorse about their behaviour.

I am pleased to see that the Network has seen this as unacceptable bullying and humilating behaviour, and the public outrage as something to take action on rather than ignore. Despite being fired from the talent show, Natalia Kills has been reported as standing by  her comments made during the live show, which saw her label young contestant Joe Irvine “disgusting” and said she was “ashamed” to be judging him, calling him a “laughing stock” and stating she found the performance “artistically atrocious”. Natalia Kills has reportedly  justified her behaviour by indicating that she speaks from the heart. In my opinion there was no heart illustrated here, only power, insecurity and the need to put someone down. This is not entertainment, nor is it constructive criticism.

When hopes and dreams are crushed: Resilience or defeat?

On further reflection, I was again struck by the power of hope and dreams of contestants like him and the willingness to step out of their comfort zone for the possibility of all sorts of personal dreams held close to the heart.For some the driver is the possibility of success or fame, for others a fulfilment of a lifelong passion, or in other more extreme cases a lifeline from a string of setbacks or even homelessness.

As viewers, we get a small insight into the emotional response from those rejected and those who pass the audition, but I can assure you that the full breadth of this emotional response will be much greater than we see on television and is likely to have long lasting effects on confidence, motivation levels and mood, depending on the individual’s ability to manage this feedback.

The question in my mind is – where does this young man go after this? What long term impact will an experience like this have on his willingness to keep doing what he loves, to strive for more musically and to face other auditions or performances with confidence?

The psychology of performance

What we know from the research about the psychology of performance in auditions is that the more importance the person places on the outcome of the audition and judge’s credibility and knowledge, the greater the possibility that performance anxiety will be experienced as a hindrance rather than a useful tool to channel peak performance.

What we also know from experience is that our last performance, particularly if it is an important one, is generally the one that stands out as the most vivid in our memory and therefore has the potential to positively or adversely affect future performances depending on our response to it.

It is a comfort to realize that this performer has the support of a strong community behind him who believe he was treated unjustly and the integrity and professionalism of this judge and her partner have been seriously questioned and publicly discussed. I can only hope that this contestant puts this damaging and personally attacking feedback into perspective and is able to see it for what it is, a reflection on the person delivering it more than his ability.

Being a performer is not for the faint hearted; Do reality TV shows prepare people for all of the consequences of such public exposure?

As a psychologist who has worked with many performing artists, the reality is that being a performing artist is not a walk in the park. It is a competitive world where opportunities may be limited and criticism, both covert or overt, is something that is simply part of the deal. Performers need to have thick skins to survive as it is a world that seems to sometimes work on a different set of rules than the non performance world.

Having said that, The X Factor like many reality shows appears to have taken audition feedback to another level with recent public and media responses accusing the judges comments as being akin to bullying and harassment. In conjunction with this, the laughing of both the judges and the audience during some performances results in public humiliation that could have long lasting effects on certain personality types who are not prepared for this.

In the real world, performers hone their knowledge, skills and experience over time and learn skills to manage audition processes to prevent themselves from becoming disheartened at every knockback. Obviously the promoters argue that people give consent to participate in this program knowing what will happen, but I would argue that there are some people who may not read the fine print or really anticipate the full impact of what they are letting themselves in for given their limited experience with auditions and the media.

What is ethically responsible behaviour?

Surely we can have some more ethically responsible and respectful panels who are both straight, honest and respectful in their feedback, while not giving false hope to those who are hanging on to a dream that will never happen in the real world, or sending them away traumatised and hopeless?

It is interesting to me that when I did my Masters research on students which was a treatment study to assist tertiary music students with performance anxiety, it was a huge deal to get the study passed via the ethics committee. The committee needed to be reassured that what I was doing was ethically sound and would have no harmful effects on the participants who were at that impressionable age and in the midst of training for a professional career. I find it ironical that this was so difficult to get through and yet it seems increasingly easy for a show like this to support this public humiliation of participants with the justification that it is entertaining and makes good television.

The fears of performers are varied – success, failure, judgment, humiliation, embarassment, crushed dreams. What are yours?

Certainly, being a professional performer in any field means being willing to expose oneself to the judgement of others, and as a singer there is nothing more exposing than standing on a stage in front of an audience of 1000’s with just a microphone and a backing track, several judges, and cameras to film the entire process.

As far as auditions go, you can’t get much more exposing than this and for many contestants this will be the first time they have ever auditioned in a setting that even comes close to the degree of exposure! The anxiety that we observe people going through before and during a performance is relative to the level of pressure that people are put under in this environment and the additional prospect of public humiliation or instant stardom (which can be just as confronting for some) takes performance anxiety to huge heights.

Take Susan Boyle as an example of that; she coped with the actual performance but the aftermath of her instantaneous fame as a result of  YouTube contributed to her being hospitalised. From all reports she struggled to adapt quickly to overnight fame, but over time learnt to accept the change to her life and made the adjustment that was necessary in order to survive and continue her career.

Some people fear failure and the loss of the dream they most desperately wanted and if unsuccessful are then forced to either accept the feedback and feel the pain of that or struggle against it and keep battling for something that is objectively out of their reach.

Others secretly fear success as success represents the need to always maintain a high standard, leaving no room for mistakes or public attention that changes a person’s life overnight. So those who get through the first round with a glowing audition have set the bar high for themselves and others and may begin to panic at keeping this up.

As a contrast being just very good with potential or even better “the underdog” allows people to be shielded from the extra pressure that comes with expectation.  I see many performers who shield themselves from stepping too far out of their comfort zone despite incredible ability preferring to stay safe than branch out into territory that draws more attention to them or contributes to more stress.

So what can we learn from all of this?

Those that enter shows like this need to be willing to accept whatever is thrown at them, including the possibility that their hopes and dreams will be crushed or the contrasting possibility of a new kick start to their life which could literally turn things upside down overnight with social networking forums sending footage viral.

Sometimes contestants could benefit from taking heed of constructive feedback and be prepared to let go of the struggle with feelings of loss, disappointment and anger and accept that they might indeed be better off finding a different dream and just enjoying singing at home in the shower. There certainly is a lot that is out of the control of the contestant but one thing is for sure, how a person responds to this feedback is critical in terms of predicting their emotional response, behaviour and future as a performer.

Could you survive the reality TV show experience?  Contact us if you need any further assistance with performance and find ways of increasing your resilience and confidence.